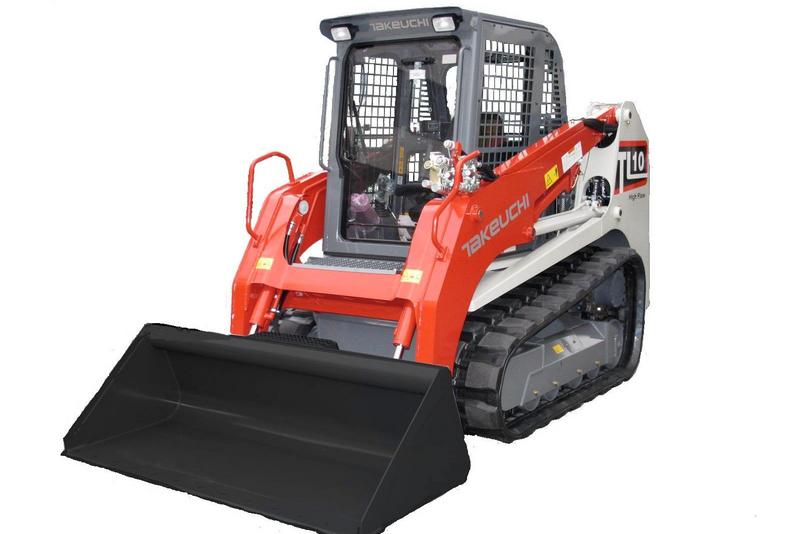 Takeuchi say the two new models are their most powerful track loaders to date. Both models feature Tier 4-compliant Kubota diesel engines with plenty of power and torque, as well as Takeuchi's new exclusive "Eco Mode" feature to reduce fuel consumption
Takeuchi have announced the latest addition to their tracked loader range - the TL10 and TL20 - which have just been released in the USA.

Takeuchi say the two new models are their most powerful track loaders to date. Both models feature Tier 4-compliant Kubota diesel engines with plenty of power and torque, as well as Takeuchi's new exclusive "Eco Mode" feature to reduce fuel consumption. The TL 10 and TL12 are respected to replace the TL240 and TL250 in the Takeuchi tracked loader range. The lighter TL220 and TL230 Series 2 are unchanged at this stage.

With an operating weight of 4,680 kg (10,318 pounds) and a rated operating load of 1,512 kg (3,334 pounds), the TL10 is powered by a V3800CRT Kubota diesel engine with common rail fuel injection and turbocharger that delivers a claimed 7 percent increase in horsepower and a 9.4 percent improvement in torque compared to previous models.

The TL12 has an operating weight of 5,270 kg (11,618 pounds) and a rated operating capacity of 1,837 kg (4,051 pounds). It is powered by a V3800CRTI Kubota diesel with common rail injection, turbocharger, and intercooler that delivers a claimed 10.8 percent more horsepower and a 19.5 percent improvement in torque as compared to previous models.

New selectable power modes are common to both the TL10 and TL12, which allow the operator to match the engine performance to any specific task.

According to Takeuchi, the Eco Mode feature that debuts on these models can provide up to 15% fuel savings, thus lowering operating costs, while still offering maximum torque and excellent power. Eco Mode works by limiting the engine speed to 2,400 rotations per minute. When engine load is less than 30%, the speed will automatically decrease to 2,040 rotations per minute after 8 seconds. Conversely, when power demand exceeds 30%, the engine speed will return to the throttle position setting.

Both the TL10 and TL12 feature a fully welded, purpose-built frame with integrated cross members and an industry-exclusive undercarriage that maintains steel-to-steel contact between the large, heavy duty rollers and forged steel imbeds that are incorporated into the rubber track.

The TL10 and TL12 feature improvements to the operator's cab as well. First, the new models feature a sealed and pressurized cab, which helps maintain a clean environment for the operator. Each cab also features improved blower fan and HVAC performance, and a high-back seat with adjustable suspension and height settings. Available options include a 3-point seat belt, heavy-duty radio, and ride control.

For safety, the cabin roll-up door can be opened regardless of the boom/attachment position and can be locked in the open position. Takeuchi's precision pilot controls are complemented by an optional quick-change selector valve, which allows the operator to select between ISO or H pattern controls. An easy to use multi-function control handle provides fingertip control to the 14-pin attachment connector while a heavy duty rocker switch now provides control of the "G" and "H" pins of the connector providing more attachment versatility and control.

Both Takeuchi TL10 and TL12 track loaders are available in the USA, but local release of either of these models has yet to be confirmed.