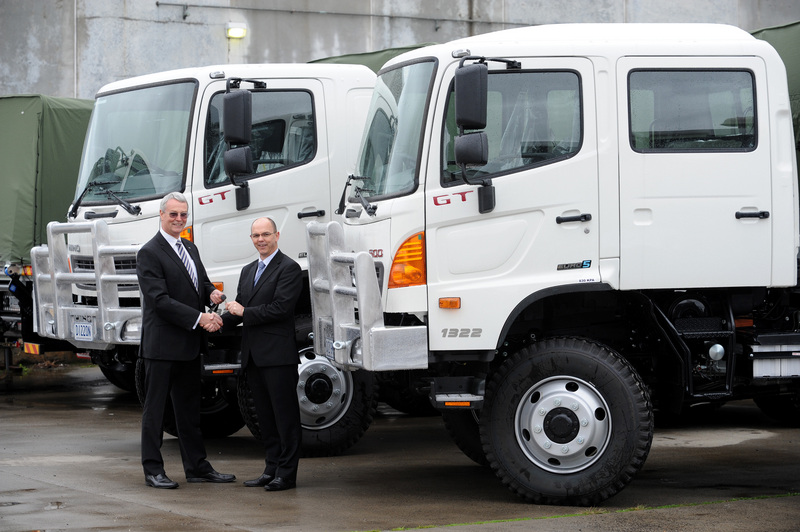 Hino's all-terrain 500 Series GT 4x4 has been chosen by the Army to fill a number of critical logistical roles around Australia
Hino Australia has completed the delivery of a batch of 56 new Hino 4x4 medium-duty trucks to the Australian Defence Force (ADF) as part of a long-standing relationship between the truck manufacturer and the Army.

Hino's all-terrain 500 Series GT 4x4 has been chosen by the Army to fill a number of critical logistical roles around Australia. The units supplied have been configured in both GT 1322 standard cab and GT 1322 crew-cab specification.

The Australian Defence Force has received more than 520 Hino trucks since 1995, actively deployed to varying multi-task roles, with the 500th vehicle presented to ADF personnel in late June.

The purpose-specification trucks in this latest delivery are equipped with a heavy-duty steel tray and tarp, tailgate loader, heavy-duty leaf spring suspension and all-terrain protection equipment such as Hino's genuine alloy bullbar. The Defence trucks are also fitted with 11R 22.5 wheel and tyre combinations which will be the standard specification on all Hino 4x4 GT 500 Series models from July 2012 production.

Hino Australia National Government Sales Manager, Tom Ayrton said Hino was able to meet an obligation to have the vehicles enter service by June 30 thanks to the efficiency of Hino's production system and a network of local supply partners.

"The first chassis did not arrive in Australia until late March and the last arrived in early June," Ayrton said.
"To get all 56 trucks completed with bodies and modifications and then delivered into service within three months is an outstanding achievement. It required a substantial team effort from Hino's Australian staff and Dealer network and key suppliers All Truck Bodies and VSE Engineering to get them ready in time," Mr Ayrton added.

Hino has partnered with fleet specialist financier LeasePlan as part of the Defence supply contract.