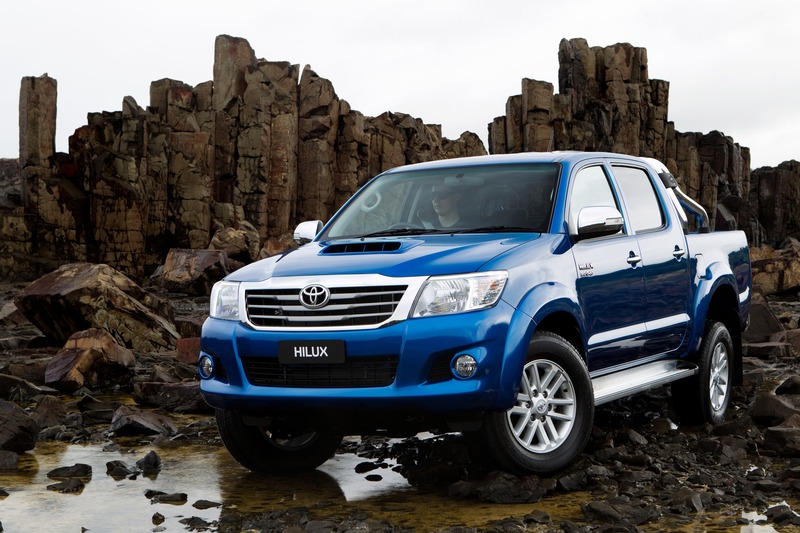 Australia's third best-selling vehicle for 2013, the 2014-spec Hilux dual cabs gain a new five-speed automatic transmission which improves fuel economy and emissions - on 4x4 turbo-diesel models - by more than six per cent to 8.7 litres/100km and 230 grams/km++.

Other improvements across all dual cabs include fresh interior colours and materials, as well as new display audio systems. Top-of-the-line SR5 versions gain a reversing camera* and satnav** system with SUNA™ Live Traffic# updates as standard - all viewed on the display audio screen.

"HiLux is popular throughout Australia and these improvements will be welcomed by a wide range of users including mine workers, farmers and other businesspeople who require a tough, reliable vehicle," Mr Cramb said.

"Families will also appreciate the added safety, technology and other features that make travelling in a HiLux even more comfortable," he said.

The five-star safety rating was achieved via the standard fitment of stability and traction control, brake assist and electronic brakeforce distribution. Stability control was previously a $1,500 option on the 4x4 mid-range SR grade.

A front passenger seat-belt reminder is also part of the package on 4x4 vehicles and, for Dual Cabs, a three-point seatbelt for the centre-rear seating position.

The MID, viewed on a liquid crystal display, shows current and average fuel economy, average vehicle speed, cruising range, outside temperature, a compass and time. This feature is new to SR, as are the Optitron dials for speed, engine revs and fuel tank/coolant temperature.

Dual/Extra Cab versions are distinguished by a black interior while the Single Cab's cabin features black and grey tones.

Leather-accented seats are newly offered as a $1,500+ option on 4x4 SR5 turbo-diesel Dual Cab pick-ups, and includes power adjustment for the driver's seat.

The full Hilux range retains its three body styles, three equipment levels, three engines and three transmissions driving either the rear or all four wheels. All SR5 variants are pick-ups, while mid-range SR and rugged Workmate grades are also available in cab-chassis specification.

In addition to the 11 Double Cabs there are six Single Cabs and five Extra Cabs, with the total of 22 variants split evenly between 4x2 and 4x4. The five Workmate variants are exclusive to the 4x2 range. There are 12 SR variants - five 4x2 and seven 4x4. Four of the five SR5 variants are 4x4 equipped.

Fourteen models in the range are fitted with the 126kW/343Nm common-rail diesel with electronic direct injection and a variable-vane turbocharger - Hilux's most popular engine.

Three diesel variants gain the fuel-economy benefit of a five-speed automatic transmission in lieu of the previous four-speed unit. The remaining 11 diesels are mated to a five-speed manual gearbox.

Customers wanting the 175kW/376Nm V6 petrol engine can choose from four vehicles - three Dual Cabs and an Extra Cab, all with a five-speed automatic transmission.

A further four vehicles are fitted with a 116kW/240Nm 2.7-litre four-cylinder petrol engine - Workmate Double and Single Cabs with either a five-speed manual or four-speed automatic.

Every new HiLux is covered by the capped-price Toyota Service Advantage at a maximum of $170 per service^^.

* Reversing camera is designed as driver assist devices only and should not be used as a substitute for skilled driving or safe parking practices. The area into which the vehicle is to be driven must be visually monitored by the driver.

# SUNATM GPS Traffic Updates are available in metropolitan Adelaide, Brisbane, Canberra, Gold Coast, Melbourne, Perth and Sydney; it operates from information provided by Intelematics Australia and may not cover all road incidents and congestion. Please see www.sunatraffic.com.au for details.

## Not all devices will be compatible. Functionality varies depending on device.

@ iPod® is a trademark of Apple, Inc. 3.5mm AUX input for portable audio players, USB input for some iPod/USB memory sticks. Not all devices will be compatible and functionality will vary depending on the device.

^ The Bluetooth® word mark is owned by The Bluetooth SIG, Inc. Not all devices will be compatible and functionality will vary depending on the device.

+ Manufacturer's list prices are provided for media purposes only and do not include statutory charges or other on-road costs.

^^ Maximum payable for standard scheduled servicing (normal operating conditions) until first of 3 years or 60,000km (up to the first 6 services). Excludes government and rental vehicles. For full details of eligibility and exclusions, go to toyota.com.au/advantage.