One of many contractors that were part of Deere's long joint product development process, grader customer Jerry Pate had a definite idea what kind of controls he wanted
The G-Series motor grader is one of the workhorse models of John Deere construction equipment. It was improved early last year with the introduction of a new IT4 certified engine and the choice between console-mounted or armrest-mounted fingertip controls. The choice of control operation resulted from customer input conceived in a longstanding collaborative development process.

One of many contractors that were part of Deere's long joint product development process, grader customer Jerry Pate had a definite idea what kind of controls he wanted.

"If you're going to go with electro-hydraulic controls, don't put them in the old 'antler rack' position," Pate said. "Put them where guys want them - in the armrest but in the same familiar pattern. Now you can run this machine 9-10 hours a day and you don't get fatigued. You're not reaching out. It's almost like sitting in a recliner or an easy chair because you're in a natural position

"With the G-Series, it's not 'one size fits all' - you're free to choose the control style that makes you the most comfortable and productive," said Kent Stickler, product marketing manager for motor graders, John Deere Construction & Forestry. "And every grader has a steering wheel, no matter which control system you pick."

New IT4 Engine
Another customer need Deere has built into the G-Series is the new IT4-certified engine. For maximum uptime, diesel particulate filter cleaning occurs during normal operation, without requiring action by the operator. The engine also has a new John Deere-exclusive engine-stall prevention system that senses when the engine is going to stall, then automatically shifts the transmission to neutral. This saves wear and tear on the engine, which prolongs engine life and boosts uptime.

There's no sacrifice to visibility going from the Tier 3 G-Series to the IT4-certified engine G-Series. Visibility is excellent to the sides and rear, thanks to the same angled, profiled sheet metal from the operator's station.
G-Series graders can also be equipped with other engines to meet worldwide requirements.

Choice of Controls
With Deere's G-Series graders, operators continue to get a steering wheel and can choose from the console-mounted low-effort industry standard control pattern (G models) or intuitive and easy-to-use armrest-mounted industry standard fingertip controls (GP models). If an operator specifies the fingertip controls, he'll still have a choice between using lever steering and the ever-present steering wheel. Either way, G-Series controls provide a smooth, predictable response and plenty of power whether the application calls for heavy blading or fine grading.

The Grade Pro Package
The G-Series' Grade Pro package offers a suite of productivity-enhancing features for high-production grading. Grade Pro models have industry-standard pattern fingertip controls located on the armrest. With the push of a button, operators can engage return-to-straight, bringing the rear frame back to centre. Exclusive cross slope control allows operators to select a desired slope and maintain it with just one blade lift lever. Slope control technology helps all operators do their jobs more efficiently.

"When you combine smooth ergonomically correct controls, cross slope and return-to-straight, you have a machine with unmatched comfort and control," Stickler said. "These are the controls that all blade operators prefer - there's no need to re-learn how to run this motor grader."

All John Deere G-Series Grade Pro units are grade-control ready. These machines can accept Trimble or Topcon grade control systems, whichever the customer prefers. Customers asked Deere to integrate grade control buttons into the knobs of the control levers, making the system comfortable to use and easy to run. As a result, operators can keep their hands on the blade controls for higher productivity.
There are 12 G-Series models, ranging from 195 to 283 net hp. Six of the units feature six-wheel drive, enabling them to power through the toughest cuts with power flowing to all wheels. Six-wheel drive gives operators increased traction, the ability to get more work done in fewer blading passes and a 30 percent increase in blade pull.

The G Series was an evolution of John Deere's highly regarded graders. Designed and built in the USA by John Deere, the company that built the first articulated grader, the G Series introduced a number of enhancements to satisfy both operators and service personnel.

There were five models in the G Series: the tandem drive 670G and 770G, and the six wheel drive 672G, 772G and 872G. All models were available in either a standard (G) or Grade Pro (GP) configuration.

Operator satisfaction
The G Series was available with traditional mechanical lever controls, or the new Grade Pro system, with eight low- effort armrest-mounted fingertip levers. Both systems used the industry standard control layout that experienced operators are familiar with. A steering wheel is standard on both systems, with Grade Pro models having the choice of lever steering as well. With either system operators were able to maintain travel speeds when fine grading or roading.

The 672, 772 and 872 (in both G and GP) featured six wheel drive, allowing the operator to set the front wheels to turn at the same speed, faster or slower than the rear tandems. More and more contractors are finding that a smaller grader with six wheel drive can do the work of a larger tandem drive machine.
Large capacity Tier 3 compliant engines with common rail fuel injection and variable geometry turbochargers are used on all models. With high torque the G Series are able to keep pushing under heavy loads, while still providing low running costs.

The 872 G was offered with a John Deere PowerTech Plus 9.0-litre high torque engine. To make use of all this extra torque, John Deere used an automatic differential lock that can be engaged continuously, and automatically disconnects when turning.

The G Series used the smoothest shifting powershift transmission on the market. With Event Based Shifting it sensed the load on the engine, as well as other inputs, to determine the optimum shift time when the operator selected a new gear.

All G-Series graders also had keyless start with multiple security codes, enabling owners to control who has access to the grader. 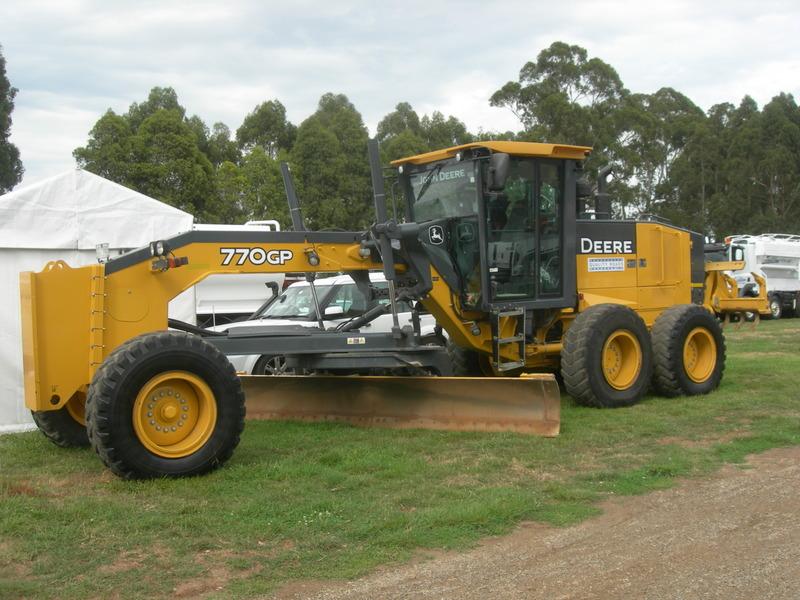 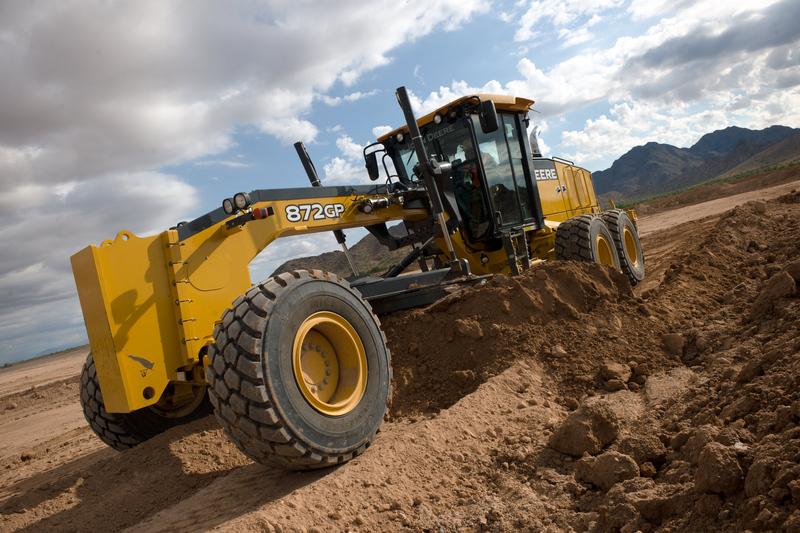 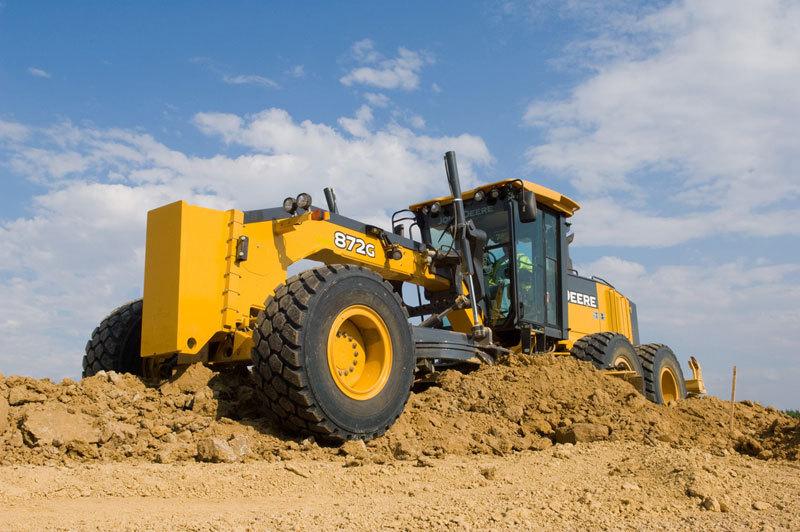